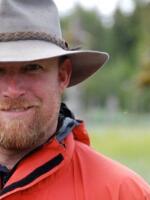 Jeremiah Millen
A native of southeast Iowa and a world traveler, Jeremiah Millen moved to Alaska in 2000 and started volunteering on KNBA as a host of the Borealis Bluegrass Breakdown (also known as the BBB) in late 2002. He's continued with the station ever since, and has hosted the BBB ever since. Jeremiah lives with his wife and three dogs in the Mat-Su Valley near the base of Hatcher Pass. In addition to this love of spinning and playing bluegrass and folk music, Jeremiah is a huge music collector and trivia buff, with thousands and thousands pop, rock, jazz, blues and soul selections in his library. When Jeremiah was asked how in the world he has time for a radio program in addition to all his other interests and obligations, he just shrugged and said, "I love bluegrass and I love radio, sharing this with the word is perhaps the greatest gift!"
See stories by Jeremiah Millen