Cross-cultural politics: Rep. Mary Peltola and the art of Yuuyaraq'ing

Rep. Mary Peltola was prepared to take her oath of office on Jan. 3, to begin her first full term after finishing out the remainder of the late Congressman Don Young’s term.

As befitting the first Alaska Native to serve in Congress, she wore a black kuspuk for the occasion -- a traditional Yup’ik dress with big pockets trimmed in red. She also wore boots made of fur and hide called mukluks.

But as the week dragged on, Peltola, a Democrat, was still waiting to be sworn in, a ceremony that can’t take place until a new House Speaker is elected. But after round after round of voting, the Republican majority has yet to elect a speaker – the first time this has happened in a century.

Then again, these are not ordinary times – and Peltola is no ordinary politician. In fact, she told Alaska Public Media’s Liz Ruskin, she would consider teaming up with Republicans to form a majority coalition, a form of power sharing that happens often in the Alaska legislature.

Peltola’s Yup’ik supporters are not surprised to hear this. Marie Meade, a Yup’ik culture bearer and language teacher, says she’s glad Alaska voters have finally sent a politician to Washington D.C. who embraces the “Yuuyaraq,” a Yup’ik code of conduct that has been passed down across the generations.

“For me, Yuuyaraq is just being human, to live and survive, to live honorably,” said Meade, who believes the world needs more “Yuuyaraq’ing.”

“I’m just happy and joyous,” Meade said on Nov. 8, the night Peltola learned she was the top vote getter in her fight to keep her job in Congress. At that point, under the state’s new system of ranked choice voting, Peltola did not have enough votes to win outright and had to wait until second choice votes were counted. When they were included in the totals, she won with a 10 percent lead.

Meade says she felt pride during the campaign as she watched Peltola practice “yuuraraq,” and its teachings that encourage interconnectedness, balance and respect for others, even those you disagree with.

Sen. Donny Olson, a Democrat who currently serves in a Senate bi-partisan majority coalition, believes Peltola is in a position to influence national politics.

“Whether you were a Democrat or a Republican, she was able to identify with both sides and was able to connect with them. And I think that was the secret that people seemed to really latch onto.”

Olson, who is an Inupiat from the Bering Sea region, served with Peltola in the state legislature. He says cultural values like the Yuuyaraq are shaped by Alaska's harsh environment.

“You cannot have anybody that’s adversarial,” Olson said. “You need to help somebody else if they’re in need of food, in need of shelter, in need of friendship, in need of anything.”

As a state lawmaker, Peltola was known for her ability to work across the aisle. When she started the tradition of wearing kuspuks on Fridays at the State Capitol — in support of an Alaska Native staffer who was suffering from a serious illness — it wasn’t long before other female lawmakers followed suit, both Democrats and Republicans. Soon male lawmakers began wearing them.

Peltola also bonded with Sarah Palin when she was governor. Both were pregnant at the same time and remained friendly, even after Palin stepped into the race for Congress. During the candidate forum at the Alaska Federation of Natives in October, Palin, a Republican, acknowledged her special relationship with a Democrat.

"Let me tell you I’ve been involved in politics for 30 years. But this is the toughest campaign, because of her, Mary,” Palin said to the crowd, which began cheering wildly. “We are in Mary’s house, I know that.”

Anton McParland, who was Peltola’s campaign manager, said this was a powerful political moment.

“It was so inspiring and real,” said McParland. “It was that relationship that was more important than the partisanship.”

McParland said it’s rare to find a politician who is so good at building across-the-aisle relationships.

“There are like aspects of her Yup’ik upbringing that she would share with me, how one speaks more in the affirmative than the negative,” McParland said.

One of Peltola’s first moves in filling out the remainder of Don Young’s term was to retain his chief of staff, Alex Ortiz, a position now made permanent. That step did not go unnoticed in Republican circles – a Democrat taking on a key staffer who had served a Republican.

It didn’t hurt Peltola that Sen. Lisa Murkowski, a Republican, endorsed her candidacy over the two Republicans in the race, Palin and Nick Begich, who sniped at each other constantly during the campaign, allowing Peltola to stand out in contrast.

But Art Hackney, a consultant for Begich, says this was not the main reason Peltola won – that her election, more than anything else, was probably due to the new ranked choice voting system – and an element of luck, when Al Gross pulled out of the special election to finish Don Young’s term.

Hackney says Peltola might have bi-partisan appeal, but it was Palin’s entry into the race, which split the vote between the two Republicans, that paved the way for Peltola.

“It left her a free ride to go be what she certainly is that everybody knows her for, is charming. And that’s wonderful,” Hackney said. “She is charming, and she does know a lot. At the same time, the proof of the pudding will be in the eating, depending on what she actually does back there.”

With Republicans in control of the House, Hackney says she won’t have the committee assignments she had under Nancy Pelosi’s leadership and may have trouble getting much accomplished, despite her desire to build bridges to Republicans.

Peltola, on election night, acknowledged she was in for a tough job – and that while serving out Congressman Don Young’s term, she was struck by how toxic today’s politics is compared to when she served in the state legislature, between 1999 to 2009.

Peltola says partisanship permeates politics today, from Washington D.C., to the school boards and city councils in the smallest communities.

“I think at the local level, they’re not designed to be partisan, but the partisanship has really crept down to every level. And it’s on steroids in Washington, D.C.,” she said. “It’s hard to go to committee hearings and talk about the issue at hand, because the conversation quickly turns into partisan bickering.”

Jim LaBelle, a retired Alaska Native Studies and history professor who taught at the University of Alaska Anchorage, hopes Peltola will find a way to use her Native culture to navigate these difficult times.

Alaska has only one lone vote in Congress, and so that vote needs to be amplified, he said.

“She needs to take advantage of the novelty of her being a Yup’ik woman, using that position to get their attention on strategic issues that she’s working on,” said LaBelle, who believes Peltola is in a position to set a powerful example for the country.

A certain amount of showmanship from Alaska’s representative in Congress would not be unprecedented. Don Young, who held the job for almost a half a century, had a stuffed grizzly bear outside his office to greet visitors and excelled at the kind of political theatre that goes against the grain of Yup’ik Yuuyaraq.

“So much of Yuuyaraq is setting aside your own ego. Setting aside yourself,” said Peltola, who struggled privately with being the center of attention during her campaign, key to winning her race. But Peltola says one part of her job is the essence of Yuuyaraq.

And Yuyaraaq has other teachings that Peltola finds helpful.

“One of the best ones is to have a good sense of humor, and to find humor in all the different moments. So much of life is enjoying the moment,” she said.

And as the 118th Congress gets underway, there is no shortage of opportunities to practice Yuuyaraq. 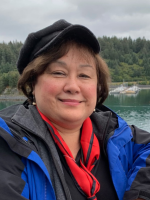