Ok, so technically the band wasn't here in studio, but Zach Carothers called KNBA and we had a chance to chat about their upcoming concert in Alaska.  Portugal. The Man began making music in the Valley around 2000 - 2001 and Wasilla and Anchorage audience's knew them as Anatomy of a Ghost. They honed their skills in Alaska, but knew that the large West Coast cities offered opportunity for even more growth. By 2006 the band released an album on Fearless Records called "Waiter: "You Vultures!" and they immediately found new audiences. By 2009 they're playing big festivals including Bonaroo and Lolapalooza. In 2010 they sign with Atlantic Records! Now in 2015 they're working on their 8th album and touring in major markets.

Through it all, Alaska has remained a real part of the band and their identity. In our conversation, Zach shared memories of going to the Alaska State Fair, their new connection with producer Mike D of Beastie Boys fame, and what it's like to be on the big tours! 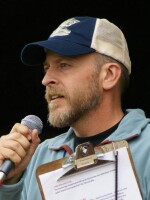 Loren Dixon
Loren’s been on the Radio in Anchorage for 30 years. Since the mid 80's he's worked with Anchorage radio stations including KWHL, KFQD, KKLV, and KMXS. His passion for Music and the 'Triple-A' radio format began in the early 90’s which led to him to help establish the format for KNBA when the station signed on in 1996. When not on the radio hosting a music show and interviewing local and national music acts, he may be on a long road trip or you’ll find him hanging out at his log cabin in the quiet, but bear filled hillside valley of his hometown Anchorage.
See stories by Loren Dixon
Related Content