Mohawk artist Brendt Thomas Diabo is based out of Toronto, Ontario. His sound is reminiscent of legendary acts like Hank Williams Sr. and Johnny Cash with an indie rock twist. Brendt picked up the guitar at an early age and played in a punk band in high school. As Brendt got older, he became inspired by the rockabilly, country, and blues music that was first introduced to him by his grandparents when he was a child. Diabo has toured the U.S. and Canada, once opening for the GRAMMY-winning band, The Kentucky Headhunters, on the Mohawk Reserve of Kahnawake where he grew up. Brendt’s third EP is entitled Take Me Back. 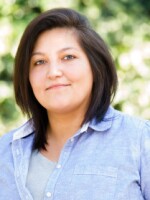 Alexis Sallee
Alexis Sallee grew up in Anchorage, Alaska of Iñupiat descent. Her love for sound for film and music started at an early age and found its focus in radio when she joined the KNBA team after graduating high school. After working as an Earthsongs sound editor along with Shyanne Beatty for two years, she attended college at Full Sail University in Winter Park, FL. There she earned a Bachelors of Science in Recording Arts. Alexis now resides in Los Angeles where she hosts INDIGEFI and is involved in the audio post production industry.
See stories by Alexis Sallee