A boarding school healing ceremony was held in Anchorage, Alaska, this fall.

The ceremony took part as people from across the state gathered for the 2022 First Alaskans Institute’s Elders and Youth Conference.

Storyteller and cultural bearer Bob Sam from Sitka, opened up the healing event by sharing some history of boarding schools in Southeast Alaska, from the early opening of the Sheldon Jackson School to students who were sent to the Carlisle Indian School in Pennsylvania.

Sam says it was devastating for students to be stripped of their languages and cultures. He says some died of a broken heart. He also shared some stories of boarding school survivors talking about the trauma they endured.

Students were often told they were worthless, and many were physically, mentally and sexually abused.

“I’ve been involved with boarding school issues for a number of years now, primarily I return bodies. I began to listen to the survivors and people who suffered from the trauma of boarding schools and from there I’ve developed a ceremony for healing. Getting comfortable to coming to terms with the issues related to trauma.”

Sam, who works on repatriation efforts, has brought home the remains of many students. He says that work and his overall research of U.S. Indian boarding schools caused him much trauma.

He spent many years in Japan learning about Japanese culture. He then returned home to Alaska embracing his Lingít culture. He has since fused both cultures to help him heal from the trauma.

Sam put on his traditional regalia, which he says is part of the healing process, describing each piece from his tunic to an orange apron representing “Every Child Matters,” a robe, and a woven headpiece representing Indigenous boarding school students in Canada.

Sam then told a story about raven and the return of traditional knowledge to the people. He ended the ceremony by having people form two lines. Boarding school survivors then walked down and were given affirmations, handshakes and hugs from each person as Sam sang.

Sam says the healing is for all people, especially for those who survived boarding school and those who died. Work continues to bring students home from Carlisle to tribes across the U.S.

National Native News was given permission to record and share the boarding school healing ceremony. 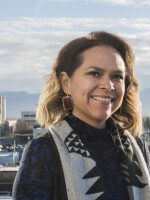 Antonia Gonzales
Antonia Gonzales is a member of the Navajo Nation and grew up in Arizona and New Mexico. She is the Anchor and Producer of the award winning nationally syndicated radio program National Native News, which airs on tribal and public radio stations across the United States and Canada; covering social, economic and cultural issues, which impact Indigenous people worldwide. Antonia has worked for Koahnic Broadcast Corporation for nearly a decade. She started as an Associate Producer for KBC's nationally syndicated talk show Native America Calling. Before joining the Koahnic family, she was a one-woman-band television reporter for a CBS affiliate in Southeastern New Mexico where she covered two counties and followed stories such as large drug busts, cave rescue trainings and the famous annual bat flight at Carlsbad Caverns National Park.
See stories by Antonia Gonzales